A downloadable game for Windows

Here is my entry to the Dungeon Crawler Jam 2022!

It's a 2D dungeon crawler inspired by old classics and made using similar techniques as back then. No 3D here, just simple 2D graphics painted back to front (Painter's Algorithm) using images from image atlases generated using my own AtlasMaker tool. This game is meant to be a showcase project for the AtlasMaker demonstrating the capabilities. I hope you like it :)

The source code is written for the LÖVE framework (https://love2d.org/) and is released on CC0 license . I urge you to take into consideration that this game was made in a week when you look at the spaghetti code :D

Note: On the jam version there is a bug where the collision detection on the area exits isn't working so you can walk right through them and crashing the game. It's fixed and will be updated as soon as the voting period ends. There is also a bug regarding a certain key at the very end.

Great little game, but I found one flaw that kept me from completing it. You can't load from the menu, you gotta run all the way back to the inn from the start just to load a game when you die.

Edit: Looks like I played 0.9, is this perhaps fixed in the updated version?

Hi. Thanks for checking out my game :)

Yes, unfortunately there are a couple bugs in the version I submitted to the jam and when discovered it was too late to fix it.

One of the bugs was that when you save and go back to main menu there isn't a button for "Continue game". However, it appears if you quit and restart the game.

Haha, I can relate :D

Great entry!  I managed to get all the way through and defeat the queen, in around 2 hours, that's an amazing amount of content!

A couple issues I ran into: a confirmation on Load would have been nice, I accidentally fumbled and clicked the wrong button instead of saving -_-.  Almost put it down for good, but was only about 20 minutes of progress lost, so kept on playing, and glad I did!  I could buy a spell before I had a spell book, which led to some confusion, and some extra saving and loading as I came to the conclusion that it was bugged and that I'd tried to buy a spell and failed but it took my money anyway -_-.  Later found a spell book and all  was well though.

Loved it when I first encountered fire ants and they were a scary threat, and later I was one-shotting them, that felt great!

Hey! Thanks for playing it, and all the way through even! :)

Yes, definitely. A save/load/overwrite confirmation would be a nice addition. Regarding buying spells before you have a spellbook. Others have mentioned this too, so I guess what I should've done is not allow the player to buy spells until he/she found the spellbook. Instead have the shopkeeper say "But sir, where will you put that spell? You don't have a spellbook!".

Thanks for the fix, got back to kill ant mum.

Great :) Thanks for playing it!

Hey. Thanks for checking out my game :) You move with WASD keys but you can turn around using Q and E.

Loved it! The art style is gorgeous,. The atmosphere is creepy and nostalgic.

I still don't know how to use the spell I just bought. Maybe I missed something? Good game overall!

Thanks for doing a video on the game. It was enjoyable to watch :)

Spells require that you hold a spellbook in your right hand. 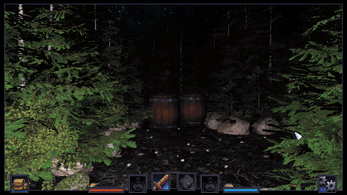 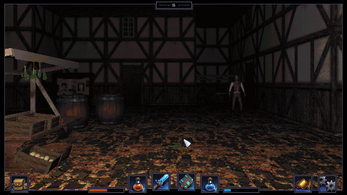 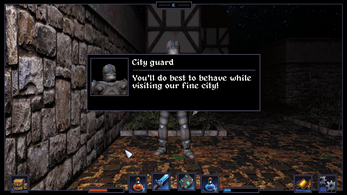